LAUGH IT UP, STARE IT DOWN at the Cherry Lane Theater 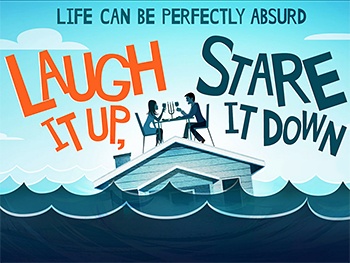 LAUGH IT UP, STARE IT DOWN

Not surprising that director, playwright, screenwriter, and novelist Alan Hruska won a 2005 award for his direction of Waiting for Godot. Beckett’s play is the first thing that pops into your mind when Laugh It Up, Stare It Down begins. Hruska’s play has all the hallmarks of absurd theater: rat-a-tat dialogue, bizarre humor, indecipherable meaning, seeming purposelessness, the bewilderment of the characters and the audience, and the pervasive sense of menace.

The play is written in twelve scenes that mark the twenty year journey of the relationship between anthropologist Cleo (Katya Campbell, Disgraced, How to Make Friends Then Kill Them, Guiding Light, Law & Order) and Joe, (Jayce Bartok, Fall to Rise, Made in Poland, The My House, Law & Order), Oz, Andersonville). Joe is a brilliant ne’er-do-well who, for the sake of Cleo becomes a hotshot financier. Cleo’s friend, Dorothy, who plays a waitress/nurse/and Alberta besides, (Amy Hargreaves, Years of Sky, Living Proof, Homeland, Blue Bloods, Mercy), becomes a snake in Cleo and Joe’s Eden. Maury Ginsberg (5 Flights Up, Vinyl—a Martin Scorsese film soon to be on HBO, and more) plays Dr. Malone, Chalmers, Stephen, and Arturo. His accents as an Italian guide and as the British Chalmers are so perfect and his persona changes so completely that you wonder if it’s really him playing all these parts. For me, he’s both the menace and the savior of this play.

Set-designer Kevin Judge (Irena’s Vow, Lovesick, Anthem) has made much of few elements with the backdrop of large windows that light up and especially the chandelier that casts rosette patterns on the floor and keeps lowering slightly to, and the end, be a major prop in the ending of this voyage.

This is a play to bring at least one friend to, leaving time for coffee afterwards to discuss it. Questions that might be bandied about are: What is real? Is the ending actually the beginning? Is the humor overwhelmed by intellectualism or is that part of the joke?

Buy tickets for this limited engagement—August 26th-October 10 at: