Agatha Christie’s The Unexpected Guest at the Clurman Theater

On a cold and foggy night in the South of Wales, Richard Warwick, a wealthy, cruel man, sits in his wheelchair facing the windowed door of his darkened study, shot through the head. His wife, Laura (Pamela Sabaugh) leans against the wall. The foghorn on the channel sounds mournfully. Headlights sweep across the room, illuminating Laura, and then the French door opens. Enter the stranger, Michael Starkwedder (Nicholas Viselli), who came to make a phone call because his car broke down and discovers that he’s stumbled into a murder. And so begins Agatha Christie’s 1958 thriller, The Unexpected Guest, with its dazzling turns and twists. There was whip crack tension in the air and when the guy behind me sneezed loudly, I jumped in my seat and sucked in my breath. (Hope I didn’t catch anything).

The cast features core members of TBTB (Theater Breaking Through Barriers) which gives actors with disabilities a chance to take parts that have nothing to do with their disability and perform with the able bodied. Newcomers include Scott Barton as Julian Farrar, Melanie Boland, Christopher Abrosiano (The Good Wife), Anthony Lopez, Lawrence Merrit, Anne Marie Morelli, and Pamela Sabaugh (The Goldman Project).

Pamela Sabaugh will remind you of the glam of a Joan Crawford. How beautifully she wears the clothes designed by Amanda Jenks. And her every gesture has power, especially her posture at the end. No spoilers here!

The set for the play, Warwick’s studio, juts forward and recesses, which gives the feeling of so much more space and mystery. Kudos to the set and lighting designer, Bert Scott.

Director and Yale School of Drama graduate Vivian Rauch Lichterman was an actress on soap operas, a writer who has published in Redbook and written for the sitcom Kate and Allie, among a long list of other credits, including being a scholar of genocide. At sixty-seven, she is the oldest person in the CUNY system to be awarded tenure. How is that for breaking through barriers? She was a close friend of TBTB’s founding Artistic Director, of the late Ike Schambelan who died before this production opened. 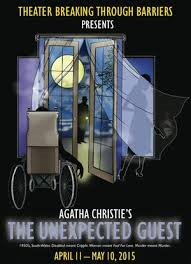 The Light We Cannot See by Anne Casey